RAMANI master is a spiritually dedicated yoga teacher from South India.
Where the yoga legends from .He started his yoga practiced at the age
of 6th with A. Yasudase anttony.who learned from sivananda vedanda
yoga center. 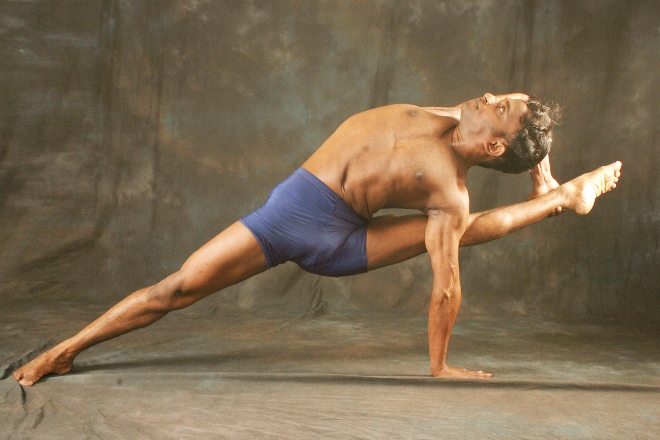 He took part in the yoga competition and he won many gold medals
and championship award in state and national level yogasana competitions
in India. Later he realized yoga is not only for a sports also a gift to the
people those who suffering from physical and mental problem .So he decided to service to the people by teaching yoga.

He Graduated Diploma in yoga naturopathy, then he also completed his
Teacher Training in International Sivananda vedanda yoga center in Maduri south India.He was tittles as Yogaraj,yoga siron mani,yoga chakra, yoga jothi.He did yoga performance for media like Sun .T.V in India and Global.T.V in international .He had many interviews with the news paper in his home town.

Many of his students are now working as yoga teachers in Hong Kong,
china and other Asian cities; spreading yoga knowledge and awareness
and thus proving the point that “Knowledge is wealth as long as it is shared.”

He not only has won many Titles in Yoga Championships but has also
given workshops and demonstrations across different countries including
Hong Kong, china, and India,

Mani specializes in Hatha yoga,Ashtang yoga, Ashtang vinayasa,Power yoga,
Yin yoga, Hot yoga,Rhytha yoga, Kriyas and Banda’s, Pranayama and Meditation, Flow yoga, and Hot flow, Invers yoga, and Iyangar yoga. His passion and mission in life is to spread the benefits of Yoga to all those who are interested and open to its philosophy