Yoga practice during menstruation is a controversial issue. There are those who say that no woman should practice yoga during her menstruation, others say practice everything. Some say practice inversions, others say avoid. Some say a strong practice is useful  All women are different with regards to menstruation. Some may not have any side effects, low energy or feel at all different than they do during the rest of the month, while others have such extreme pain, mood swings, fatigue, bloating, irritability and so on that they have to stay in bed for the first few days. Because no woman is the same there are no set rules regarding what to practice during menstruation but there are some general guidelines that can help. What is important is that we listen to our bodies during this time. 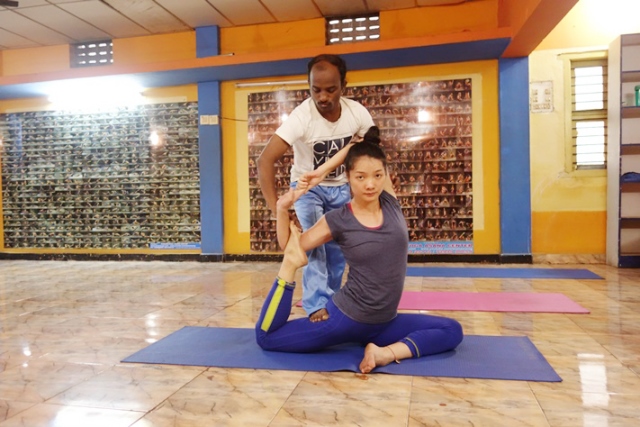 Menstruation time is a time of heightened awareness and sensitivity. Often the problems that we have during the month become more real at this time and affect us more strongly. At this time it is particularly useful to examine these problems and find solutions. Menstruation is a time to explore and look within. It is a time to nurture and heal the body and mind. Again the way we look at our menstruation greatly differs between women. Some women prefer to ignore it as much as possible, to pretend or detach themselves from what is going on. These are generally the ones who are more competitive and out to prove that they are just as strong as men. Strength is good but we should also have the awareness of our bodies and give time to listen to them. It is not to say that we can all hang around the house not doing anything but we can treat our bodies with care and respect. We should put in efforts to remain balanced and therefore cultivate inner strength.

Some associate guilt, uncleanliness or other negative emotions. These may have come up due to the culture one has grown up, the views of one’s parents or some other events in life. Relaxation techniques such as yoga nidra can be very beneficial for these women in clearing away these negativities and instead bringing acceptance and positivity of one’s self. The main reason why we may choose not to practice may be due to the associated symptoms of menstruation. If a woman is having very extreme menstruation then even the thought of practicing will cause negative emotions. The best practice at this time is then yoga nidra and some gentle pranayam such as bhramari (humming bee breath), anulom vilom (alternate nostril breath), ujjayi (victorious breath) and deep breathing.

If we are not feeling too uncomfortable then a yoga practice can be useful to help alleviate any period pain or back pain, balance the emotions – mood swings, anxiety, anger, depression, irritability and gentle open the pelvic region, relieving any congestion. Menstruation is a time to vary ones yoga practice to look within and find the peace and tranquility.

Not to do (asanas) 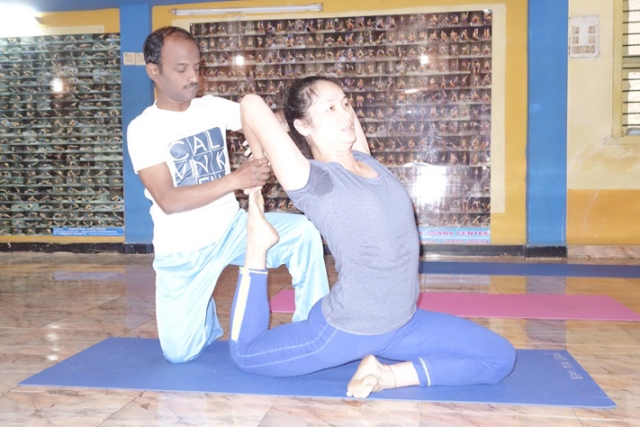 mooladhar chakra (cervix), is reversed. This is useful to help increase the prana in the body and to help awaken the kundalini but when menstruating it goes against the natural flow. It can therefore stop or disturb the menstruation at this time and lead to other reproductive problems later on. Another reason is that during inversions the uterus is pulled towards the head and causes the broad ligaments to be over stretched which cause partial collapse of the veins, leaving open arteries to continue pumping blood. This can lead to vascular congestion and increased menstrual bleeding. Previously people used to think that inversions could cause endometriosis and infections but it is now thought not to be the case.

Secondly, any very strong asanas particularly strong backbends, twists, arm balances and standing positions that put a lot of stress on the abdominal and pelvic region should be avoided, especially if the woman is going through a lot of pain at the time. The reasoning for this is very logical. If the pelvic region is causing spasm and pain why cause more contraction and pressure to the area. Also these positions need more physical strength and exertion which can be lacking during this time and can be depleted further by the practice. Strong vinyasa and power yoga should be avoided for the same reasons. Surya namaskar, when done slowly and gently, can be useful, however it should be avoided if there is a lot of pain or heavy bleeding.

Thirdly, bandhas should be avoided for similar reasons. On a pranic level they move the apana upwards instead of down and physically they add more contraction to an already tight region and in the case of uddiyan bandha increasing the heat which can lead to heavier bleeding. It may seem like there are many positions that cannot be practiced however this is not the case. Many positions can still be practiced and many more positions that may not be in ones daily practice can be incorporated and explored. It’s all about listening to the bodies needs and accepting that this is a time of introversion, acceptance and balance

Do remember that it is not necessary that you have to practice asanas during your period. For the first two days you may have a break from asanas. That doesn’t mean you cannot practice other techniques such as pranayam, yoga nidra and meditation. All will have benefits. It is important that if you decide to practice that you should be aware of and listen to your body. Do not push or strain and instead do some more gentle poses but hold them a little longer. Generally it is good to practice positions that allow one to become more grounded, to alleviate any emotional disturbances and to gain inner strength. 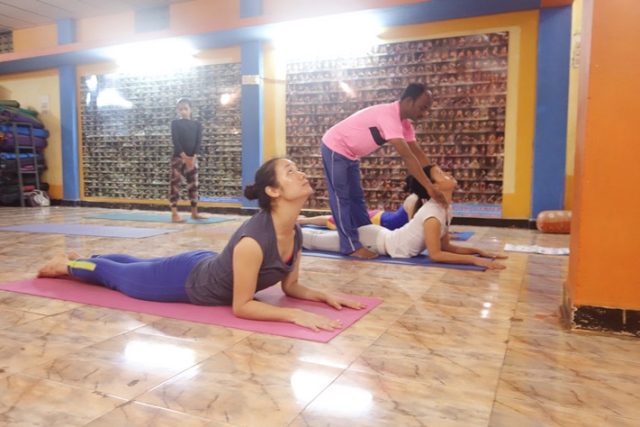 To warm up one can practice the preparatory movements 1 to 12, arm movements, leg and knee movements. The pawanmuktasan series 1, 2 and 3 from Swami Satyananda are also recommended. Surya namaskar (Sun Salutation) can be practiced if there is no heavy bleeding or cramping. But it should not be performed in a fast manner. Chandra namaskar (Moon Salutation) is another alternative which is more soothing, harmonizing and calming at this time and helps to cultivate the feminine aspects.

Gentle forward bends give a light massage to the abdominal and pelvic region, helping to relieve congestion, heaviness, cramping and heavy bleeding. They also bring calmness to the mind. Examples include Paschimottanasan (Forward Bend),Ardha paschimottanasan (Half Forward Bend), Ugrasan (Ferocious Pose), Vajrasan Yoga Mudra Type 1 (Child’s Pose), Shashankasan (Hare/Moon Pose) and Janu Bhalasan (Standing forward bend). Practice these positions to 50-60% of your capacity or with the support of cushions or bolsters. Do not strain or do strong forward bends. Vajrasan Yoga Mudra Type 1 and Shashankasan can be practiced with the knees further apart. Gentle twisting positions can remove back pain, cramping and congestion. Examples include leg movement type 2, vakrasan (Twisted Pose) type 1, preparatory movement 2 and 3 and gentle twists in sitting positions. Avoid very strong twisting positions.

Gentle backbends, especially when supported, can alleviate back pain and pelvic discomfort. Examples include Supta Vajrasan (Sleeping Thunderbolt) (sitting on heels or with heels apart)and Supta Titaliasana (Sleeping Butterfly) supported with bolsters. The Vajrasan series is also useful especially for removing tension from the back and to remove pelvic congestion. The whole series can be practiced or just a few of the poses. Avoid strong backbends.Leg up the wall poses help to remove stagnant blood from the legs without lifting the pelvic region and help to open up the pelvic region. Legs can be straight up the wall or separated to a comfortable distance or with the soles of the feet together.

Other useful positions include Marjariasan (Cat Pose)and Vyaghrasan (Tiger Pose) which both help to remove back pain and pelvic tension. Titaliasan (Butterfly) to tone the pelvis, Sulabh Pawanmuktasan (Simple Gas Release Pose), with knees apart, to relieve back pain, Sulabh Koormasan (Simple Tortoise Pose), Simple Pigeon and simple supine spinal twists. This is not a complete list as there are thousands of asanas to choose from but just remember the guidelines and main points when choosing and practicing asanas.